The Annual Awards Presentation is North Shore Coaching College’s way of celebrating the academic achievements of our students. A number of prestigious awards are handed out to our highest performing students who have shown their ability to succeed at North Shore and beyond. 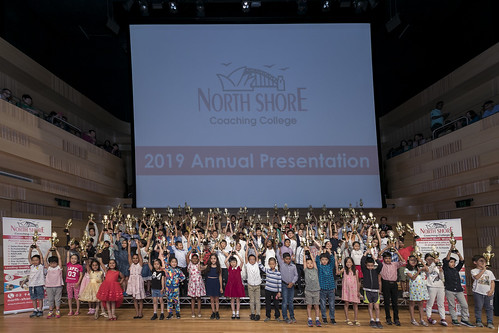 North Shore Coaching College together with The University of Melbourne was awarded a SPIRT grant to research, “Ways to Improve Problem Solving Abilities of Students”. Close to 1,000 students were involved in the “proof of concept” and the final report was well received.

From the earlier success of the research with The University of Melbourne, North Shore Coaching College was further presented a 3-year Australian Government grant which aimed to raise “Students’ Problem-Solving Skills through Extensive Use of Computers”.

For the past fifteen years the University of Melbourne, through its Assessment Research Centre, has been collaborating with the North Shore Coaching College, Research & Development Division to conduct the Creative Problem Solving Competition.

During that time we have studied the process of problem-solving and shared a great deal of excitement as children from all over Australia have shown that they are talented, creative and competitive. The work produced by the students has been of the highest standard, and our studies have shown that the children’s work is among the best in the world. So many of the students have been successful in many other ways as well, from gaining access to selective schools, winning scholarships and success in other competitive academic pursuits.

The University of Melbourne is looking forward to the next phase of the Creative Problem-Solving competition in which we will be presenting the materials via the computer and then via the Internet. These are exciting developments and will place North Shore Coaching College competition at the forefront of the world’s problem-solving assessment strategies. The staff of the university working on the project will continue to include the world’s leaders in this field of research and development, and we can confidently expect that North Shore will retain its place in the leadership of such approaches to assessment.

More important however is the motive behind North Shore Coaching College’s involvement. The incentive for the company to remain involved is their aim to celebrate excellence and to encourage high-level performances. In this way, North Shore is making a serious contribution to the pursuit of excellence in Australia, and the University’s Assessment Research Centre is proud to be associated with the work. Thank you for the opportunities the project has given to Australia’s children.